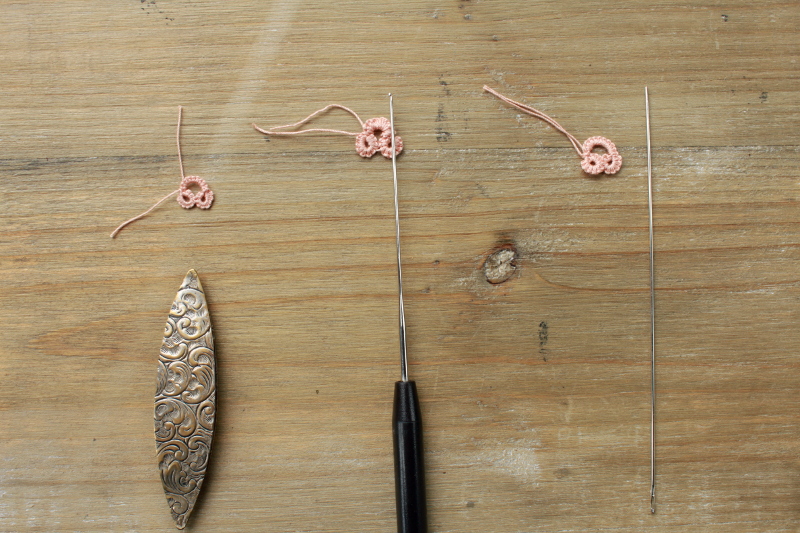 Needle tatting, cro-tat and shuttle tatting: These are the 3 best-known techniques for tatting, but not the only ones.

Shuttle tatting can also be performed with the fingers or with a sewing needle. The technique is strictly the same since the node must be transferred.

Shuttle tatting can also be imitated by other methods: needle tatting, crochet tatting (cro-tat), Takashima’s double hook frivolity, or simply with an ordinary hook forming meshes imitating the tatting. These methods make it possible to obtain an aspect close to the shuttle tatting, but the structure is different.

As I have often heard people who want to learn tatting say that they hesitate on the technique to choose, I engaged in comparative tests.

Having learned the shuttle tatting and I had never had the opportunity to try needle tatting and cro-tat. I bought a hook and a needle and I used the same pattern and thread.

The cro-tat is practiced with a special hook whose length is uniform. I discovered with surprise that there is no hook thinner than 1mm … it seems to me already very rude!

When you know the shuttle tatting, the passage to the hook is done without difficulty. A sliding knot, a stitch at the place, a stitch upside down … very close to the assembly of knit stitches! Small tip however to slide the stitches on the hook without losing the thread: a sliding knot attached to the hook.

I admit that I did not handle the hoop very well, which is much rougher than the rings. But the result is 50% bigger than the one made by the shuttle with the same thread.

My opinion: Why not for a project with a big thread, but I think especially that the interest of this technique can be easily mix tatting and hook in the same work (besides the old books show that our grandmothers were this).

For my needle test, I had a 1mm needle (for comparison with the hook), but there are more fine.

As crochet, the assembly of meshes is done intuitively for all those who have already knitted: mesh place or mesh back. Unlike cro-tat, mesh slip is easy. I did not have more difficulty for the arch than for the rings.

My opinion: Easier than shuttle tatting, but the result is still much bigger. So if you are looking for a fine job, if for you the lace should be delicate and light, opt for shuttle tatting. By the very admission of the needle tatters, there is a limit in the finesse of the thread used which does not exist in the shuttle.

On the other hand, with the needle the meshes are formed around the metal and leave a “void”. The tatting with the needle gives a result more “soft” than the shuttle tatting in which the nodes are tight against each other. Depending on the type of work that you want to achieve, this can be a disadvantage.

Finally, the question of speed: needle tatting has a reputation for being faster. It seems obvious to me that if we compare 2 beginners, the needle will go faster than the shuttle. But it would be more interesting to compare on experimented tatters … but there I have no way to answer.